Kweiseye is an art criticism blog written by Tom Kwei. If you enjoy this article, browse the archive here for more than 60 other critiques of both artists and exhibitions. Any questions/queries/use: tomkweipoet@gmail.com.

Despite being highly regarded within her own lifetime, it took more than 230 years after Judith Leyster’s death for her to be rediscovered for a contemporary audience. Up until that point the entirety of her own work was actually considered to be that of acclaimed portraitist Franz Hals, an error eventually corrected by the excellently named critic, Cornelis Hofstede de Groot.

Leyster’s work typically is of people within scenes of entertainment and leisure. The preoccupations of the then growing Dutch middle class. 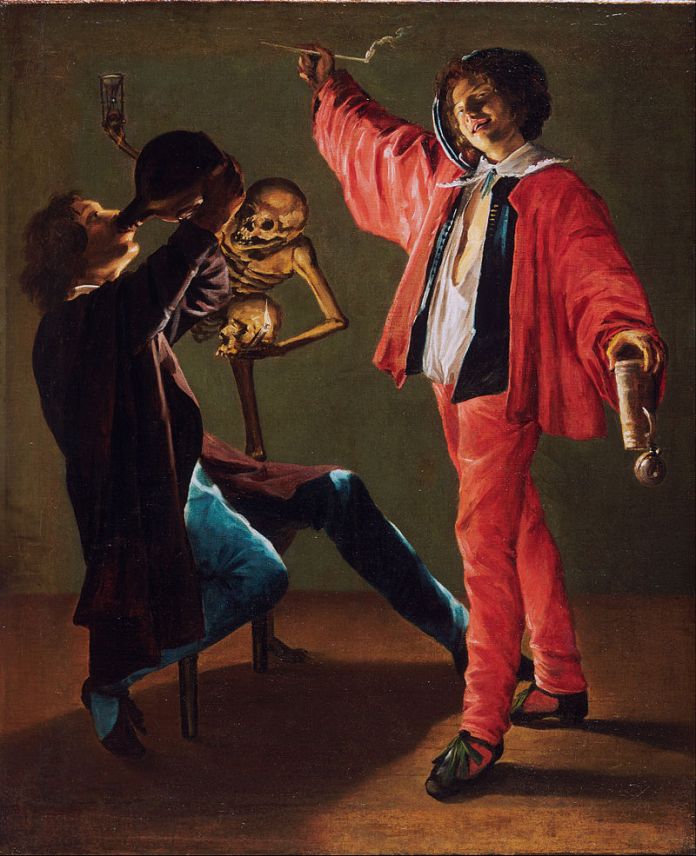 The signs are clear that the men have indulged too much. The tankard is tipped empty, the long pipe smoking. The drinker at the left is maternally gripped to his jug, cheeks bulging. And as if this wasn’t enough to connote avarice, there are the items that the grimacing skeleton holds too. A flickering candle reaching its end, a running hourglass, and, somewhat more obscurely, his own head. A sight to suggest the loss of reason maybe, or, more likely, something to underscore the uneasiness of the image.

Whilst the moral lesson of The Last Drop is practically spoon-fed (the title a pun on both the end of the bottle and the end of life), what holds interest is the sense of light. From the candle in the middle we have not only the bones themselves illuminated in all their macabre glory: the broken teeth, the wide, searing eyes which are enrapt looking at the oblivious gulper. But the features of the indulged too, the ornately clothed smoker lit up in a delicious execution of skill, the watched man on the left shown on his darker side with the light peeping out, gilding a three dimensional edge to the image.

The light also draws us into the face of the standee whose look is a perfect vision of drunkeness. His mouth toothy and agape above eyes rolled back, looking off over the shoulder of the viewer to some beleaguered sense of reason.

Alongside the skeleton, this element of otherwordlyness is compounded through the blank, grey background. Where actually are we here? A bar or something of that type would make sense but they seem on display as a lesson rather than amidst mere depiction. Everything is good in moderation so they say, even moderation.

Lost in the trills of practice, the small boy (who is much smaller than his large tented clothes let on), looks out into the nothingness that musicians inhabit when they’re amidst practice. Behind him other extraordinarily well realised instruments hang, the sheen of the violin and recorder something really to behold. But he is elsewhere, engaged with his flute; his mouth pursed, his fingers curved into a melody.

Again, much like The Last Drop, Leyster takes us to a blank background to reinforce all the details within. The arch of the chair the boy sits on, the cobra like patterning that creeps up the leg, as well as the delicate, hushed white ruffling of his collar.

There 0f course is no sound in painting, no other sense but sight. Yet Leyster seems to have captured the moment so well in its tranquility and envelopment, that you strain a little to imagine what sound the boy is making.

For Dutch genre painting of a similar ilk, read about the earlier explored Jan Steen (1626 – 1679) here.

To keep up with Kweiseye and all the art I write about, follow me right here on this blog or @tomkweipoet